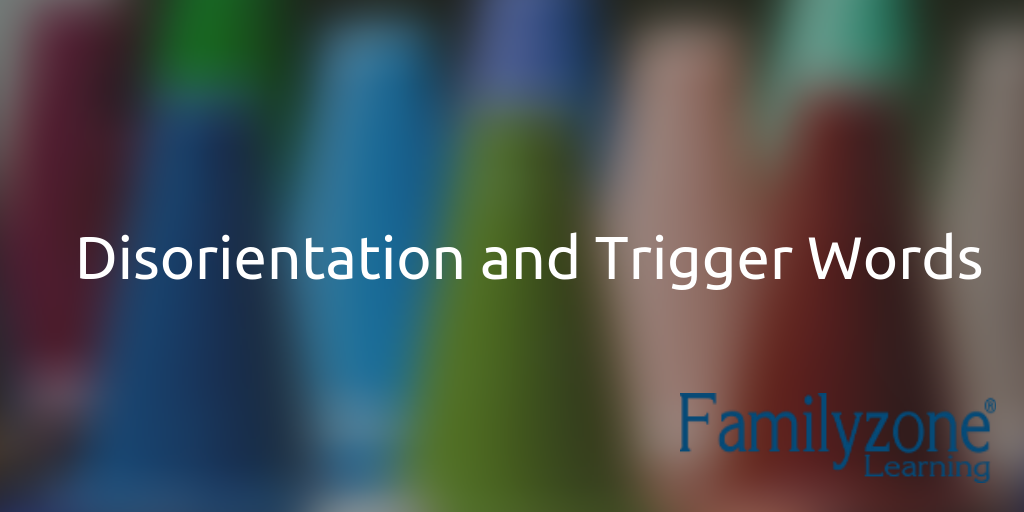 You will often see the terms Trigger and Disorientation mentioned when the Davis programs are discussed. Here is an overview on what each entails.

Begin dyslexic means you think in pictures. The Davis Dyslexia Correction Center explains how a picture thinker may have one or more of the following traits and attributes:

All of these above mentioned attributes can help a dyslexic escape into disorientation.

You can in some way experience what it is like for a dyslexic. Start by imagining a clay man walking. Clearly see the clay man and how he walks. We say dyslexics think in pictures but it should be noted that these pictures move like a movie as they experience the picture. Now imagine the clay man walking see how he moves how he swings his arms and any other thing you can associate with walking.

Say to your self aloud: “The man is walking”. As you say this keep the picture of the walking man in your head. Now break it up in its parts. You can see a man very clearly. You can see very clearly how he is walking. Yet the sentence you said aloud contained 4 words. You have a picture for man and one for walking. You are missing pictures for the word The and the word is.

It is difficult to form pictures for these words. Where you experience the sentence as “The man is walking”. A dyslexic will experience the sentence as “___ man ___ walking”. Also consider if we change the tense to now say: “Tomorrow the man will walk”. Now we have the added complexity of the future tense how do you visualize the Tomorrow part of the sentence? As a normal thinker all of this may sound easy to manage and overcome but consider the following piece of reading material that you may encounter in a South African grade 1 class:

O John! The sun has just set. It is not hot now.
Let us run and jump.
I think it is fun to run and skip and jump.
See the duck on the pond!
Her nest is up on the bank under the rock.
We must not touch the nest, but we may look at it.

Simple to read for anyone above grade 2 level. Yet what the dyslexic sees is different. Here is the same reading piece with trigger words removed and replaced with _.

Even after reading the original piece it is still difficult to figure out the context for the reading piece with the trigger words removed. As part of the The Davis Dyslexia Correction® Program Ronald Davis identified over 200 of these trigger words. Notice how triggers can include punctuation, numerals and abstract concepts like time, emotions and tenses.

In the Davis Dyslexia Correction® program we refer to words that is difficult to represent in pictures as trigger words. The words may trigger a state we refer to as disorientation. A dyslexic person will encounter trigger words causing their perception to distort leading to frustration and confusion causing the words to move or letters to switch meaning they are in a state of disorientation

When dealing with the normal two-dimensional world of reading words disorientation causes problems for the dyslexic person. Yet at the same time disorientation is also the greatest gift a dyslexic person can experience. When in a state of disorientation the dyslexic can create, invent, engineer and problem solve using highly tuned vibrant multi-sensory thoughts. This often leads to them solving problems in a creative and imaginative way. Unfortunately the South African school system is structured around reading and writing something that suffers when the dyslexic is disoriented.

When the dyslexic person comes across something that they do not understand or confuses them they will move into disorientation to examine the source of the confusion in multi-dimensionally environment of thought. This is a problem when a trigger word is encountered. The dyslexic encounters a word or concept that they cannot picture and this leads to confusion. They then disorient to find a solution or alternatively to escape from the situation where they may feel inadequate.

Dyslexics and those with ADHD can escape into disorientation for hours on end. This is possible by building an entire world of entertainment in their imaginations and because of their talent experience this daydream world much more intensely then a normal person would. The Dyslexic reader issue 11 explains how disorientation can skew perceptions:

Just think if you had the ability to escape into this alternate perception of reality. A place where if any problem or difficulty is encountered you can go and find a solution. If for some reason you cannot find a solution you can just stay in this word enjoy yourself and forget the original problem ever existed. This is what it is like to have your perception of the real world distorted. The reader goes on then to say:

“Because of their frequent disorientation, many dyslexic or ADHD individuals do not learn the basic lessons of life. Cause and effect do not exist in the disorienting child’s imaginary, alternate reality world. Thus, the child never learns the concept of consequence.”

With disorientation your sense of time is also distorted. Time never goes at the same pace when your perception is distorted. Because of this distorted time perception those with dyslexia and ADHD never learn how to form an accurate sense of time. They may start doing something and only later realize that a few hours has passed. This leads to time management issues. Because there is no sense of time there is often also no sense of sequence. The dyslexic reader explains this domino effect by saying:

Being in a state of disorientation leads to the following socially unacceptable behaviours:

The distortion in balance and motion is clearly explained by the Davis Dyslexia Correction Center when they say:

“The disorienting child can feels as if he is moving when he is not. If he just tries to sit still, he is likely to feel sick to his stomach. So he counters the false sensation by starting to move. He becomes jittery, tapping his foot or bobbing his head. This actually makes him feel as if he is sitting still. He does not feel his restless motions; he is unaware of them until somebody points them out.”

The first step towards a solution to disorientation is to explain and make the person aware of current behaviour. This awareness allows the Davis Facilitator to provide the person with methods to regulate and be aware of his or her internal clock and energy levels. Davis Symbol Mastery® is then used to master the concept of consequence and a person learns that everything that happens is a result of something else.

“It may take a little time for a child – or adult – to overcome ingrained habits. However, with Davis Orientation, the person no longer has distorted perceptions, and begins to experience the passage of time consistently. Soon he will be living in the same world as others around him, and will start to act accordingly.”

What is Disorientation? The Davis Dyslexia Correction Center

Disorientation, Confusion, and the Symptoms of A.D.D.