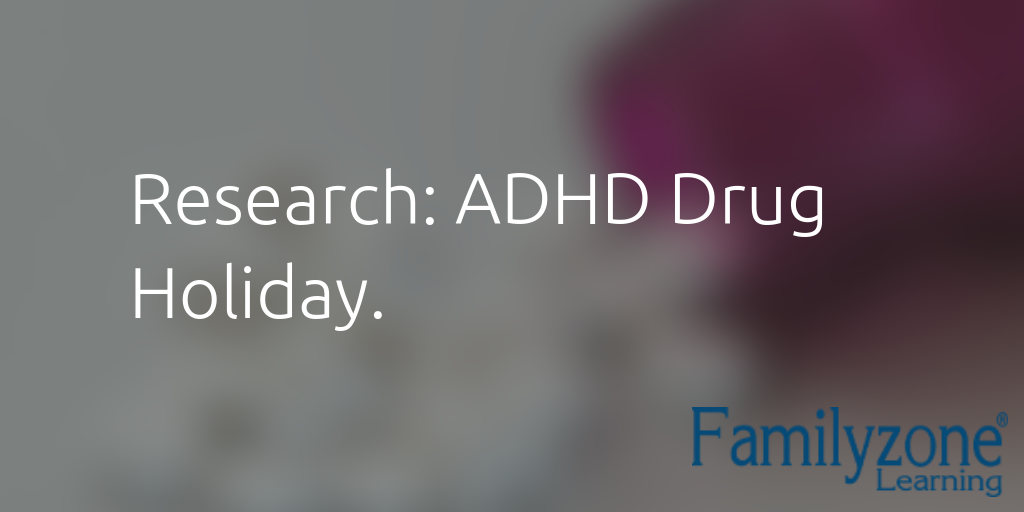 Information: A look into research

There is a need for someone to present complicated Dyslexia, ADD and ADHD research in an understandable easy to read way. Familyzone Learning will analyse selected academic work published in leading journals and conference proceedings. We aim to provide you with the essential information in a easy to read way. If you would like to read the original articles look for the reference section at the end of this blog post.

In a 2014 research article published in Journal of Child and Adolescent Mental Health entitled ‘Drug holiday utilisation in ADHD-diagnosed children and adolescents in South Africa’ the authors investigated the use of a class of drug known as psycho-stimulants. Psycho-stimulants also called central nervous system (CNS) stimulants, is often used in treatment of ADD and ADHD symptoms. The main type of CNS that is prescribed is methylphenidate. You probably know methylphenidate better by the different brand names like Concerta, Methylin, Ritalin and Metadate. Currently methylphenidate is the only type of drug licensed and approved for ADHD use in South Africa. Much has been written about the effects, the good and the bad, when it comes to ADD and ADHD medication but the focus of this article is the ADHD drug holiday.

In most simple terms a drug holiday is when a person stops taking medication for a set period of time. A drug holiday can sometimes be recommended by professionals to limit the body getting used to the effects of the medication. It can also be used to measure how good a drug is working by comparing the behaviour both on and of the drug. In the case of ADHD medication drug holidays are often managed by parents.

In short the drug can be started and stopped without any physical effects on the child. Methylphenidate does not cause withdrawal symptoms you would associate with addictive substances. The reason for this is that the drug does not build up in the body. Thus no ill effects as a result of suddenly halting for a holiday period should be experienced normally. Other ADHD symptoms will surface and can be expected since the drug is not acting on the child. It is up to the parent to determine if the psychological effects of stopping treatment is having a negative impact. The authors of the article could not find much research on methylphenidate drug holidays and therefore set out to answer three main questions.

What the researchers wanted to know

In the paper the researchers explain how they wanted to learn three things. The first was to determine if drug holidays was a common occurrence under parents. The second was to determine why parents may take a holiday from ADHD medication. And thirdly they wanted to know when parents mostly give drug holidays. They used two methods to investigate their questions. The first method is something they called a drug utilization review. In the drug utilization review they examined over 30 000 prescription records from a large retail pharmacy in South Africa. The second method was asking caregivers of ADHD children in South Africa to complete a survey.

What did they find out ?

The results discussion first makes a few observations on parents and the difficulties of raising children with ADHD. They explain how parents face pressure to conform from both the school and other parents. How there is limited access to scientifically validated information on ADHD and related medication. And that parents are either unaware, or not equipped to handle other disorders that can exist or develop alongside ADHD.

Analysing the pharmacy prescriptions data showed a decline in ADHD medication use during the South African school holidays. The questionnaire data showed the same findings in that 44% of parents opted to stop medication during weekends and school holidays. This shows that many parents stop medication when the children are not required to attend school. It is no surprise that over half of the parents report in the survey that children start to show the normal ADHD symptoms once they stop medicating. The survey results also indicated an increased appetite under children who stopped using medication.

They close by saying much more needs to be done to educate parents on ADHD and medication. This education should include how to properly use ADHD medication. They also hope that further investigation will provide: “the formulation of appropriate practice guidelines and, in turn, better overall management of the condition.”

Speaking from the Familyzone Learning perspective we believe the results obtained in the study was valid and of a high academic standard. The method was transparent, ethical and the limitations well thought out and explained.

The advantages of conducting the research is perhaps not that clear. The results is indicating that yes parents are choosing to withhold medication during week ends and school holidays. This is only good to confirm behaviour. The researchers did not make a big attempt to explain the reason for the behaviour.

The only reason the researchers provide on why parents may be taking ADHD drug holidays is in their words: “The most commonly provided reason for drug holiday utilisation was that methylphenidate was only required for school related activities. This statement reflects a poor understanding of ADHD, with many (parents) believing that it is limited to being a scholastic disorder, rather than a whole-life disorder”. The researchers are thus explaining this behaviour by saying it is a result of parents being ignorant about the disorder, thinking it is only applicable to the school environment.

We should not be overly critical with this assessment. There may lie some truth in it. But we don’t believe this is the only explanation on why drug holidays are happening. Unlike the researchers we do have the luxury of looking at their results and speculating in a way they cannot academically do.

We speculate that drug holidays are happening not only because of parents being ignorant about the condition. We think parents are people, and people take medication when something is wrong with them. Thus parents feel for the short time their child is not relying on medication that all is well and the way it should be. The child is well and not sick any more.

Perhaps some parents may feel that their children are limited on the medication. Using medication may not be their first choice but rather a result of pressure from school and society for their children to behave as expected. Stigma and the limited conflicting information on the condition can also contribute to this. Many parents may secretly deep down not even trust the initial diagnoses of ADHD. Then again we may be wrong with our assessment.

In the end every parent, child, home, situation and school is different. We all think differently about ADHD. Some parents rely on medication to get them and their children through the day. Others will criticize these parents. We cannot judge either side. We should not rely heavily on one information source or medical opinion. Both have their points and counter points. All that we can do is read and learn as much as we can. Critically evaluating available information and sources.

This article was based on information obtained from the following. We tried to remain as accurate as possible to the original sources.